We got a dog! It wasn’t my idea, I didn’t want a dog, for a start I didn’t think it would be fair on the dog, we both worked it would be on its own all day.  I lost that argument, apparently the dog wouldn’t be on its own all day because lunch time visits had been arranged.  OK if we are having a dog I would like it to be a rescued fully-grown, male, mongrel that doesn’t need much exercise, sleeps a lot and doesn’t mind being by itself.  I think I was working on the morning of the visit to the centre, we ended up with a female puppy.  She was a rescued mongrel and she was cute as chips, I don’t doubt that if I had been there we would have ended up with the same dog, unfortunately she didn’t last long, she died a few weeks later of distemper that she caught in the rescue centre. 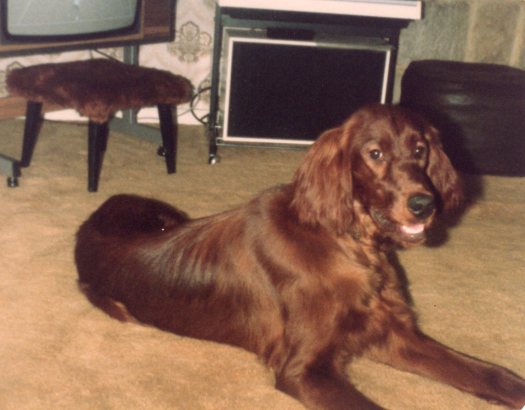 We got another dog, but – no more rescue dogs for us, oh no I had now lost that argument as well.  This time we got an Irish (Red) Setter, full on pedigree, all the paperwork and everything.  “Do you know how much exercise a dog like that needs?”  Yer, but apparently not… anyway we got a Red Setter called her Kelly and I fell in love with her.  The lunch time visits dried up, and it was me that rushed home from work to see her and take her out.  Left by herself all day she was bored and invariably there was some sort of destruction to great me as I walked through the door.  One day she had managed to completely roll (bundle) up the carpet in the dining room, the chairs were flung about the place a bit, but the rest of the furniture was all pretty much as it had been when we left, it just didn’t have a carpet underneath it.  We had our tea and went out, leaving the reconstruction for later.

I had taken to going out with her for long walks in the early evening, we used to head to an area between the canal and the railway which at the time was pretty wild and not really used that much.  I’d let her off the lead and she would run around and mostly come back to me (I wasn’t a particularly well trained dog owner) but occasionally she would get a scent of something and she would fly off.  On more than one occasion she was returned by another setter owner, the final straw was when she managed to get on the railway, it was getting dark and the trains were rushing past – something had to change.

Looking back I suppose it’s the disasters that you remember, but it couldn’t go on it wasn’t fair on Kelly, we contacted “Red Setter Rescue” and they put me in touch with a guy from Brighton who said he could give her a good home.  It was the run up to Christmas and neither of us had the time to drive all the way to the other, so we agreed to meet half way for the handover.  It’s the days before mobile phones so arrangements had to be made, Christmas Eve, 10 o’clock, Heathrow shortstay car park number 2, level 2.  How will I know who you are?  “You’ll be the one with the big red dog, I’ll find you.”  I felt like I was in a spy thriller, either that or Trading Places.

We didn’t get another dog!

Track for 1983, is Elvis Costello’s version of Shipbuilding, it has the Chet Baker trumpet on it, I bought the album Punch the Clock on the strength of this track and I was now really at odds with my prog rock mates who declared at length that “He (Elvis Costello) was as gloomy as Leonard Cohen”.

The Hitler diaries are published to much controversy and are then quickly identified as fake.  Soviet Union shoots down a commercial Korean air lines flight when it enters Soviet airspace and later only human intervention in identifying a false alarm prevents worldwide nuclear war.  Despite the protests cruise missiles arrive at Greenham Common.  America puts its 1st woman in space, fully 20 years after USSR.  Democracy is restored to Argentina, the Sri Lankan Civil War starts and America invades Grenada.  Over 300 “peacekeepers” are killed when suicide truck bombs are detonated in Beirut.  And for some technical and rather dry reason 1983, is considered to be the beginning of the Internet and Microsoft Word is released.

In the UK The Conservatives win the general election on the back of popularity engendered by the Falklands war, the official Monster Raving Loony Party contests an election for the 1st time and the £1 coin is introduced.  Belt up, it becomes law to wear seat belts in the front of cars, wheel clamps are used for the 1st time, car registration letters change from the suffix to a prefix and apparently Austin Metro becomes our most popular car – weird.  38 people escaped from the Maze Prison and £26 million in gold bars is stolen from Brinks-Mat at Heathrow airport.

The final episode of M*A*S*H is aired, and The Return of the Jedi hits the large screen.  Breakfast TV is launched in the UK, the 1st episode of Blackadder is broadcast, Blockbusters and the pilot of The Bill are on ITV and Michael Jackson’s Thriller video gets its 1st outing on MTV.  Terry Pratchett’s 1st disc world novel is released.

Thrust II sets a new land speed record at over a thousand kilometres an hour (633 mph).  The America’s Cup is won by someone other than the New York Yacht Club for the 1st time.  Hamburg won the European cup ending a run of 6 years of English dominance.  India, 66 : 1 outsiders when the competition started win the cricket World Cup, the 1st time anyone but the West Indies won it.