Since before I left school I had been saying that I was going to get a trade and then travel around the world, but something always came along to get in the way; more qualifications, love and marriage, a new job… and it did again – a quite senior role on a major construction project was on the table, but if I wanted an Australian working visa then this was the “last chance saloon”.  It was a big decision, a couple of years of living out of a backpack then who knows what, or a high-flying career in construction with ever increasing pressure and stress.

On February 6th, 1990 I flew over the polar ice cap to Vancouver, it took over 10 hours and I realised just how big the world is, the furthest I had ever been before was Turkey (about 4 hours).  I packed too much and left a trail of discarded clothes across the Pacific on stopovers in Hawaii and Fiji on my way to Sydney, Australia.

It does snow in Australia

Fraser Island, the largest sand island in the world

There are some sights in this world that no matter how many photos you see of them you are still not prepared for exactly how spectacular they are, I hadn’t actually arrived in Australia when I got my first view of the Harbour Bridge and the Opera House, we flew over the city on our way into the airport.  Sydney was a melting pot and I ended up living in Darlinghurst, sharing a house with a load of other backpackers, including one Thai guy who taught me how to cook egg fried rice without it going to mush, now there’s a life skill that has come in very useful over the years, I haven’t looked back.

I spent a few months “falling back on my apprenticeship” working as an electrician on sites in Sydney, then in the snowy mountains for the ski season, where I spent the winter changing light bulbs in ski lodges and fixing tumble dryers around the resorts.

After the ski season finished there was a tour around Australia up the east coast over the Simpson Desert to Alice Springs and Uluru (Ayres Rock), followed by Darwin down the West Coast to Perth and back to Sydney for Christmas and New Year 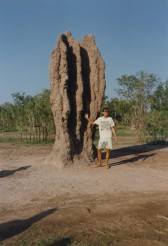 Gig of the year could have been any one of a number of sweaty smoky pub or club gigs that were frequented while in Sydney, but it is Steve Earle in Jindabyne – it was the worst night of the winter and in the end, there was only about 8 of us in the audience, but it ended up being a fantastic and intimate gig, one that won’t be forgotten.  Track of the year Loaded – Primal Scream came out as a single, just as I was leaving the UK and it fitted with my mood.

Koalas in the wild, Magnetic Island

Germany is reunified, and Yugoslavia starts to disintegrate as the communist regimes collapse across Europe.  Mikhail Gorbachev wins the Nobel Peace Prize.  The Human Genome Project and the Hubble Space Telescope are launched.  Iraq invades Kuwait and the Iraqi hostage crisis continues, the Sri Lankan Civil War ups a few gears with massacres being carried out by both sides.  UK and Argentina restore diplomatic relations (following the Falklands war).  It’s a big year for South Africa; the ANC is unbanned, Nelson Mandela is released from prison, Namibia gains independence and they get a rebel cricket tour led by Mike Gatting.  Just like me, McDonald’s and Pizza Hut were travelling, they both opened branches in both the Soviet Union and China.  The 1st portable digital camera is sold in the United States.

In the UK Glasgow is European Capital of Culture, the ambulance crew dispute ends after six months when workers agree to a 17.6% pay rise, there are poll tax riots, later dubbed the 2nd battle of Trafalgar, as more than 200,000 people protest in central London.  Margaret Thatcher resigned as Prime Minister in the UK, meanwhile, “man feeds 5 year old daughter a beef burger” doesn’t sound like a news story, but it’s John Gummer, and there’s a BSE media storm going on.  IRA violence continues with a number of bombs and assassinations.  The channel tunnel connects for the first time, Aldi and Netto both open their 1st stores in the UK

In sport, England reached the semi-final of the football World Cup in Italy, and lost in the 1st of the penalty shootout debacles.  Stephen Hendry becomes the youngest world snooker champion.