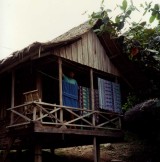 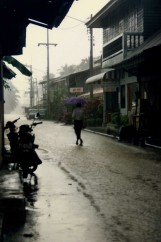 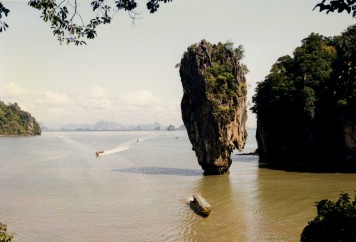 We were of course travelling with Lonely Planet’s Southeast Asia on a Shoestring, but after a bit of time looking for the hotels in “the Yellow Bible” we quickly worked out that there was plenty of (variable quality) accommodation about and following a brief period not caring whether any particular place was mentioned “in the book” we started actively avoiding the ones that were. Staying in cheap hotels on the travellers trail and bumping into the same people again and again, you quickly get bored of the “where have you been – where are you going competition”. What made it worse in my mind was the use of the word “do” to mean going to. “…then we are going to do India in six weeks”. “Really, OK what exactly are you going to do to it? And could you please put it back the way you found it when you have finished doing whatever it was you were doing to it?”

Throughout South East Asia you were never very far from a bus stop and a local lad (they were all lads, the girls had something to do) learning to play the guitar, I say learning to play the guitar actually they were “learning” one of Stairway to Heaven, Hotel California or Smoke on the Water, I still wince every time I hear the opening bars of any one of these songs. Bob Marley also took a bit of a battering, but more from being played in all and every bar/restaurant you walked past trying to find 1 that wasn’t playing Legend or showing pirate versions of a “Hollywood Blockbuster” on stretched video tapes. Sexuality – Billy Bragg is the track for 1992, the album had come out the year before and I got it on cassette in the post, picked up at “post restante” Singapore, it was great to have some new music and it kept me company on long overnight bus and train journeys across Thailand and China.

Hong Kong was fun after the shock of having to buy and wear shoes had worn off, we stayed to watch the tails of the fireworks disappear into the clouds as we welcomed the year of the Monkey then left on the boat to Shanghai. 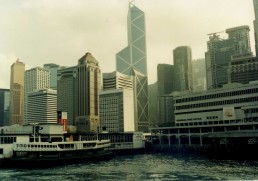 If travelling in SEA had been a breeze, China was like walking into a hurricane… there was pretty much no English spoken which I liked, it’s a challenge, but Chinese is hard and no one; bank tellers, ticket clerks or waiters, had any time to engage with our broken Chinese and a lot of pointing at the Chinese phrases in the guidebook. This made getting tickets to travel anywhere almost impossible. We had wanted to go to Xian to see the Terracotta Army but no trains, OK, will fly, no planes, we tried for a couple of days then gave up, settling for a short trip to Hangzhou and Suzhou, and even then we had to go back to Shanghai to get a train to Beijing. Vegetarian food was also proving problematic, I had to learn to say “I’m a Buddhist” in Chinese to get people to understand that I didn’t want any meat.

I got ill in Beijing and was “blue lighted” through the streets to “Beijing No 1 Hospital” with a Supraventricular tachycardia, it sounds worse than it is, and I was stabilised and sent on my way with what I now know to be some extremely potent Chinese beta-blockers. We had tickets for the Trans-Siberian Express but came to a conclusion that 5 days on train across what was being dubbed “the new wild east” while relying on Chinese pills of unknown origin might not be the best thing to do. We flew home via Gaungzhou, Hong Kong and Kuala Lumpur, and I went to see the doctor, who immediately confiscated my beta-blockers.

If there is a gig of the year it is my first Glastonbury, I had been to Reading in the late 80’s but this was another level of size, fun and frivolity, especially as we were given tickets at very short notice by a couple of “entertainers” we’d met on the boat from Hong Kong to Shanghai and in spite of our skint state off we went, why not, we hitched again, and had a chat about the existence of god again. I said I was a Buddhist in Chinese!

Bush and Yeltsin meet and declare that the Cold War is over. Boutros Boutros-Ghali becomes Secretary-General of the UN, the EU’s Maastricht treaty is signed. The Bosnian war starts in earnest and Black Wednesday meant that the UK pound and the Italian lira were suspended from the ERM.

In the UK; The IRA bombing campaign continues, Betty Boothroyd becomes the 1st woman Speaker of the House of Commons, the Church of England votes to allow women to become priests. The Conservatives with John Major at the helm were voted in for 4th term. The Queen complains about her annus horribilis; there’s a fire at Windsor Castle, Anne and Mark divorce, Andy and Fergie and Chuck and Di both announced their separations, we didn’t get a day off! And David Mellor resigns after (it later turns out) getting his Chelsea kit off.

The 1st text message is sent and received, Manchester metrolink opens – trams are back, but vinyl records pretty much disappear from the high streets, the last edition of Punch is published and the Cartoon Network is launched.

The Winter Olympics take place in Albertville, France, where the Great Britain team fail to win a medal of any colour, the Summer Olympics were in Barcelona, Pakistan win the cricket World Cup, beating England in the final. Denmark, who only qualified because Yugoslavia were thrown out at the last minute win the European Football Championship.