Bits and Pieces by the Dave Clark 5 is the first song I remember seeing on the tele’ and the first song that made me look up from whatever it was I was doing and go “wow what’s that”.  What was I doing?  Who knows, but a story that has stayed with me and recounted to all the girlfriends that made it home to meet mum is that at some pre school age I took her sewing machine apart and managed to take off so many parts that it never did go back together properly, “even though I had the man out.”  Maybe Bits and Pieces came on the grainy black and white TV and I got distracted just as I was about to put it back together.  1964 is about the time we got a TV (given to us by my mum’s grandad), Top of the Pops started that year and Bits and Pieces was definitely on (check out the link). 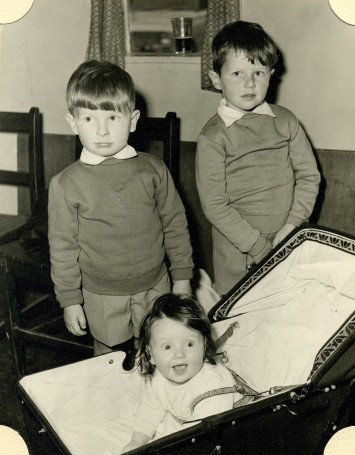 Another trip to Liverpool and another visit from the studio portrait photographer, my brother and I are used to this by now but it does seem a bit of a shock to my sister.

My 1st sporting memory is also from 1964 and it’s not football or cricket.  In a Corinthian and particularly British upper class display of daring do that stunned the winter sports world Nash and Dixon won a Winter Olympic Gold Medal in the two-man bobsleigh.

Move over Jackie Paper, I’ve moved on, (just like I said I wouldn’t) I wanted to be Dave Clark or a bobsleigh driver depending on my mood.  I don’t know what possessed me to take the sewing machine apart, I never wanted to be a sewing machine repair man

The British and French agree to build a channel tunnel (again), they reckon it will take about 5 years.  Plans and consultation to build the new city of Milton Keynes are announced, The House of Commons votes to abolish the death penalty.  Average weekly wages is £16.  Sun newspaper goes into circulation, replacing the defunct Daily Herald.  BBC2 starts and Play School is its 1st programme, and the film Zulu with Michael Caine is released.  In sport, the Summer Olympics are held in Tokyo and Donald Campbell sets the world speed record on water.  1st Caroline then Wonderful Radio London pirate radio stations begin broadcasting off the coast of the UK.