1963 started off by snowing – a lot – and in some areas of the UK snow was still lying around for a “White Easter” in the middle of April.  Being a kid, I of course thought it was great, I still love snow now.  We kept a shovel in the kitchen to dig ourselves out and we needed it, at least twice we had to use it to get out through the snow piled up against the back of the house and completely covering the door.  I loved it everything was so unpredictable and every day was exciting. 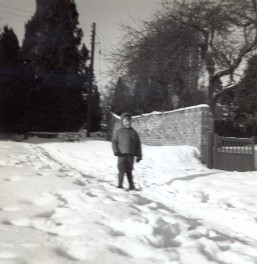 In the middle of all this snow chaos things continued to happen, my sister arrived without too much fanfare and I had to “hand down” my favourite check trousers to my brother, that’s him (in focus) wearing them in the snow.  I can’t imagine a pair of trousers, check or otherwise from 2017 surviving the wear and tear inflicted by a 4 year old and still be available for another, certainly things were built to last in those days – was it better or worse, I don’t know perhaps it’s just different.

I remember the news of the great train robbery so this is the first memory from outside my immediate world.  I’m pretty confident that it was because the “adults” around me were all talking about it, they were shocked because it happened pretty close to where we lived, that’s what would have drawn my attention to it

Track for 1963, is Puff the Magic Dragon by Peter Paul and Mary, I wanted to be Jackie Paper and frolic (whatever that was) in a land called Honahlee, oh and Jackie I wouldn’t have stopped going either, I can’t think of a single better way to spend your life than playing with dragons and string.

British politics is in turmoil, Hugh Gaitskell leader of the opposition dies suddenly, the Profumo affair comes to light, Macmillan suddenly resigns as Prime Minister, Kim Philby defects to the Soviet Union, and is named as 3rd man in the Burgess – Maclean spy ring.  Then having been briefed on all of that, Charles de Gaulle vetoes U.K.’s entry into the EEC, why wouldn’t you?  The other great train robbery starts, the Beeching report, – precursor to huge cuts in the British Railway system – is issued.  John le Carres thriller the Spy Who Came in from the Cold is published, the Beatles reached number 1 for the 1st time and Cliff Richard went on a summer holiday.  And someone or maybe sometwo (or more) shot JFK.